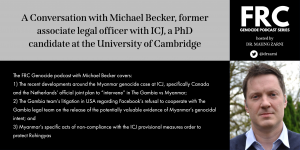 The FRC Genocide podcast with Michael Becker covers: 1) The recent developments around the Myanmar genocide case at ICJ, specifically Canada and the Netherlands’ official joint plan to “intervene” in The Gambia vs Myanmar; 2) The Gambia team’s litigation in USA regarding Facebook’s refusal to cooperate with The Gambia legal team on the release of the potentially valuable evidence of Myanmar’s genocidal intent; and 3) Myanmar’s specific acts of non-compliance with the ICJ provisional measures order to protect Rohingyas Former ICJ Associate Legal Officer  and PhD scholar at Cambridge U. Michael A. Becker shared his expert views on the various 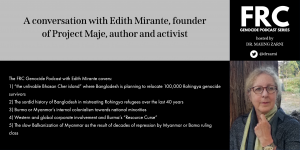 The FRC Genocide Podcast with Edith Mirante covers: 1) “the unlivable Bhasan Cher island” where Bangladesh is planning to relocate 100,000 Rohingya genocide survivors 2) The sordid history of Bangladesh in mistreating Rohingya refugees over the last 40 years 3) Burma or Myanmar’s internal colonialism towards national minorities 4)  Western and global corporate involvement and Burma’s “Resource Curse” 5)  The slow Balkanization of Myanmar as the result of decades of repression by Myanmar or Bama ruling class Edith Mirante founded and maintained Project Maje, one of the earliest and longest-serving human rights research projects on Burma,  established in 1986.  A 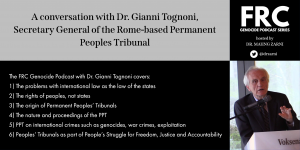 The FRC Genocide Podcast with Dr. Gianni Tognoni covers: 1) The problems with international law as the law of the states 2) The rights of peoples, not states 3) The origin of Permanent Peoples’ Tribunals 4)  The nature and proceedings of the PPT 5) PPT on international crimes such as genocides, war crimes, exploitation 6) Peoples’ Tribunals as part of People’s Struggle for Freedom, Justice and Accountability A medical doctor by profession, Dr Gianni Tognoni is the Secretary General of the Rome-based Permanent Peoples Tribunal since its establishment in 1979. Over the last 35 years Dr Tognoni has been deeply 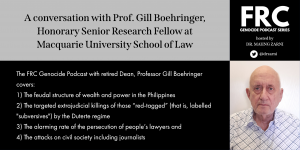 The FRC Genocide Podcast with retired Dean, Professor Gill Boehringer covers: 1) The feudal structure of wealth and power in the Philippines 2) The targeted extrajudicial killings of those “red-tagged” (that is, labelled “subversives”)  by the Duterte regime 3) The alarming rate of the persecution of people’s lawyers  and 4) The attacks on civil society including journalists Prof. Gill Boehringer is an Honorary Senior Research Fellow at Macquarie University School of Law, Sydney, Australia. He was previously Dean at the School. His research focuses on repressive states and the violation of human and environmental rights. For the past decade he 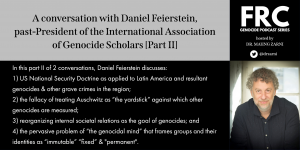 In this part II of 2 conversations, Daniel Feierstein discusses: 1) US National Security Doctrine as applied to Latin America and resultant genocides & other grave crimes in the region; 2) The fallacy of treating Auschwitz as “the yardstick” against which other genocides are measured; 3) Reorganizing internal societal relations as the goal of genocides; and 4) The pervasive problem of “the genocidal mind” that frames groups and their identities as “immutable” “fixed” & “permanent”. Daniel Feierstein holds a Ph.D, in Social Sciences by the University of Buenos Aires. He is the Director of the Centre of Genocide Studies at 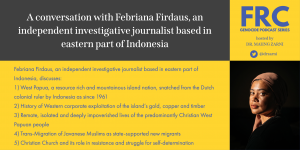 Febriana Firdaus is an independent investigative journalist based in eastern part of Indonesia. She travels across the country, from Aceh to West Papua. She has written extensively stories from the remote places of West Papua, about the silent killing of the children in the highland by Indonesian military to the hidden chronic hunger in the palm oil plantation area. Febriana works have appeared in TIME, Guardian, Foreign Policy, Jacobin Magazine, The Economist, Mekong Review, Financial Times, Mongabay, New Naratif, Al Jazeera, among others. Currently, she is a regular contributor to The Guardian, covering general issues. In 2019, she received the 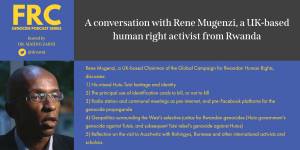 Rene C Mugenzi is a UK-based human right activist from Rwanda. He is also Chair of the Global Campaign for Rwandans Human Rights, also based in London. Rene has spoken on several platforms including universities, the House of Common, the European Union and the UN on human rights issues relating to Rwanda. In 2011, the UK Police foiled an assassination plot that has been planned by agents of the Rwandan government. Besides Rwandan human rights issues, Rene gas campaigned for the end of Myanmar’s ongoing genocide of Rohingya people. Rene Mugenzi, a UK-based Chairman of the Global Campaign for Rwandan 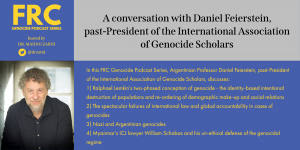 In this FRC Genocide Podcast Series, Argentinian Professor Daniel Feierstein, past-President of the International Association of Genocide Scholars, discusses: 1) Ralphael Lemkin’s two-phased conception of genocide – the identity-based intentional destruction of populations and re-ordering of demographic make-up and social relations 2) The spectacular failures of international law and global accountability in cases of genocides 3) Nazi and Argentinian genocides 4) Myanmar’s ICJ lawyer William Schabas and his un-ethical defense of the genocidal regime There will be a sequel to this episode in mid-August. Daniel Feierstein holds a Ph.D, in Social Sciences by the University of Buenos Aires. He is 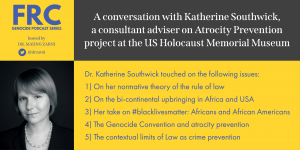 Katherine Southwick is a consultant adviser on Atrocity Prevention project at the US Holocaust Memorial Museum on the role of domestic criminal justice systems in atrocity prevention. She previously worked for over a decade on human rights, statelessness, and legal reform in Africa, Asia, and the Pacific Islands. She worked for the American Bar Association Rule of Law Initiative (ABA ROLI) in Washington DC and the Philippines on programs relating to judicial reform and the ASEAN human rights system. As a research fellow at Refugees International, she conducted research and advocacy on the global problem of statelessness. She has clerked 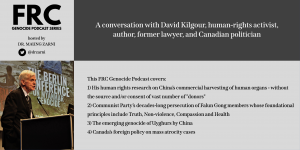