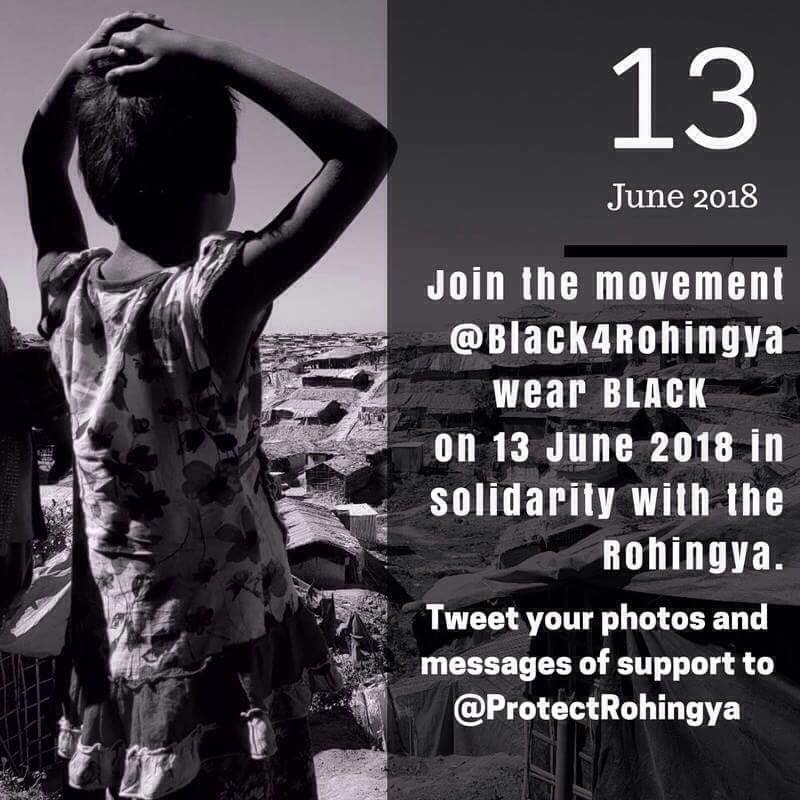 30 May 2018
PRESS RELEASE Protect the Rohingya calls for the end of the Rohingya genocide! Join the movement by wearing BLACK in solidarity on Wednesday, 13 June 2018 and remember to tweet your photos and messages of solidarity to us: @ProtectRohingya using the Hashtag: #Black4Rohingya The Rohingya have been described as the world’s most persecuted minority by the United Nations. They live in Arakan State, Myanmar where they have been denied citizenship, freedom of movement, access to education and health services. They have been subject inter alia to land confiscations, arbitrary arrests, forced sterilisation, extortion, torture, rape and collective punishment. Their citizenship was revoked by the state in 1982. Since 2012 the brutality against them has only been exacerbated by the state’s unwillingness to punish right-wing nationalists who spew hatred against them, address its apartheid policies and keep its security forces in check. Myanmar military clearance operations have forced more than 680 000 Rohingya to flee over the border to Bangladesh since August of 2017. Stories of murder, rape , arson attacks and extra-judicial killings by the military are the order of the day. With the monsoon season arriving in recent months the Rohingya’s situation has only worsened. The Myanmar government disputes the allegations, characterising the actions of its forces as anti-terrorism. It also claims that eyewitness accounts have been fabricated (while denying outside observers, including foreign journalists and even a United Nations observers, meaningful access to the region. The international community has failed to take any real action to stop the violence against the Rohingya and few countries are offering practical assistance and resettlement programs to Rohingya refugees. As South African’s having lived through a racist and brutal oppressive regime it is our duty to stand against apartheid wherever it exists. Burma should NOT be allowed to continue its genocide of the Rohingya population. We urge people of conscience the world over to join our campaign and spread the word about the 13th of June 2018. #Black4Rohingya is a Protect the Rohingya initiative, initially held on 5 July 2013 and was then moved to 13 June from 2014 onwards in order to commemorate those Rohingya who were massacred in Arakan State in the second week of June 2012. Twitter: @ProtectRohingya
Instagram: @protecttherohingya
Facebook: https://www.facebook.com/groups/308153155947556/
Contact: +2772 1786 102 Please note that interested organizations and individuals around the world are welcome to join the movement and may circulate their own press releases and posters as long as they include the hashtag: #Black4Rohingya in their campaign.