Skip to content
Home > In the News > What solidarity means for Rohingya survivors of Myanmar Genocide? 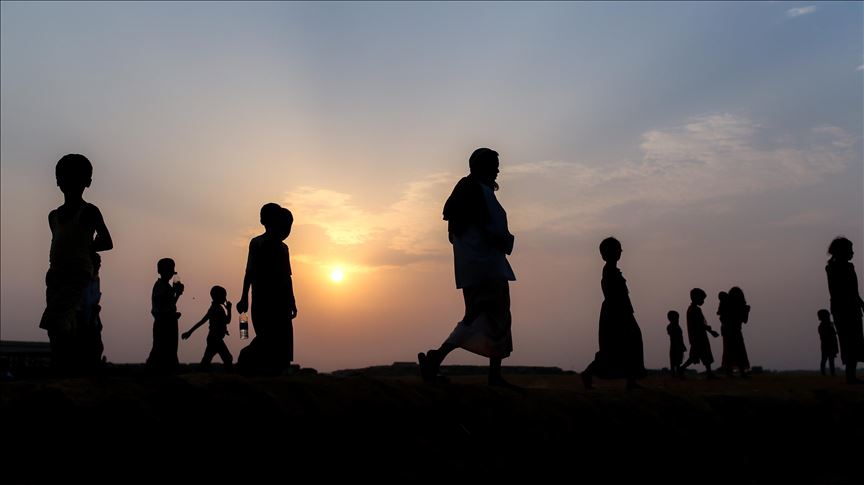 Past 3 years, Rohingya are defined not by victimhood, but by incredible ability to survive, revive, rejuvenate as people

The third anniversary of Myanmar’s largest wave of the genocidal purge of the Rohingya community in western Rakhine province on Aug. 25 was marked by the memories of massacres, rapes, and displacement of 750,000 people from nearly 400 villages.

Due to both the COVID-19 lockdown and the nearly one-year-long internet ban imposed by Bangladesh, survivors of Myanmar genocide in the camps could only engage in “silent commemorative events” in their little huts made of plastic sheets.

Last year thousands of Rohingya refugees in these camps made world headlines with their self-organized, orderly, and peaceful protest and memorial services to commemorate the second anniversary of their escape from Myanmar’s killing fields where they had to leave their dead relatives and friends.

Against this backdrop the Free Rohingya Coalition, a global network of Rohingya refugee activists in the diaspora and their international supporters – including lawyers, genocide scholars, musicians, poets, journalists, academics and researchers – organized an online marathon titled End Myanmar Genocide Rally.

This commemorative event was unique and historically unprecedented. It brought together nearly 50 speakers from all walks of life, belonging to three generations – the youngest was 15 and the oldest 85 — from every continent, who wished to contribute words, music, or poetry of solidarity.

Those who participated in the online marathon rally — the lasted more than five hours non-stop — wished to honor the memory of the Rohingya who perished not only three years ago but throughout the slow-burning genocide which Myanmar has institutionalized, under the ostensible pretext of curbing “illegal immigration” from Bangladesh since the late 1970s.

The distinguished participants included history’s first-ever Rohingya beauty queen and social entrepreneur Pan Sandar Myint who was a finalist in Miss World Australia 2020. Shafika, a Rohingya refugee woman leader who has been in Bangladesh’s refugee camps for the last 20 years spoke live from the edge of the refugee camp which she now calls her “home”.

Others who spoke included Tan Sri Sayed Hamid Albar who was the last Organization of Islamic Cooperation (OIC) special envoy to Myanmar and former Malaysian foreign minister, Maung Saungkha, a well-known dissident Burmese poet in Yangon who wrote and recited a short poem for Rohingyas, P. George Mathew, a well-known Indian-American conductor in New York who used his symphonic talents to advance the idea of universal brother- and sisterhood of humans, two past presidents of the International Association of Genocide Scholars Daniel Feierstein of Argentina and Gregory Stanton of USA, UN Special Rapporteur on human rights situation in Myanmar (2008-14) Tomas Ojea Quintana of Argentina.

Significantly Nicholas Koumjian, the former co-international prosecutor of Cambodia genocide tribal and head of the UN’s official documentation center tasked to investigate, compile and document evidence related to Myanmar’s international crimes against all humans and communities living within its territories also joined.

In 12 different languages including Mandarin, Malay, Khmer, Bahasa Indonesian, Turkish, Italian, Spanish, Tamil, Burmese, Rohingya, Japanese, and English the participants delivered their messages of solidarity and played live or recited poetry – all in the genuine spirit of human solidarity.

Here is a sample solidarity message – delivered by Natalie Brinham (pen name Alice Cowley), a well-known co-author of an influential publication The Slow-Burning Genocide of Rohingyas in Myanmar – that captured the spirit of the event:

“There is very grave importance to a day of remembrance when those who lost their lives remain uncounted. When their deaths remain unrecorded. When their lives remain unacknowledged by the state that annihilated them. August 25th is a day to ensure that those uncounted and unnamed people are not erased from our collective consciousness. It is a day to reflect on the capacity of one group of human beings to inflict unimaginable brutality and cruelty on another. A day to make sure memories are not erased when the fickle media cycles move on. But It is also a day to honor the survivors.

British Ethiopian poet Lemn Sissay, who had his identity stolen from him by the British State said:

‘I am not defined by my scars, but by my incredible ability to heal.’

Three years have passed since a wave of genocidal violence was unleashed on the Rohingya people in their homeland in Rakhine State. The collective wounds and trauma suffered by Rohingya can never be fully healed. But if anything in these past three years, the Rohingya have become defined not by their victimhood, but by their incredible ability to survive, to revive and to rejuvenate as a people.

There is a lot of talk of how victims of genocide and the stateless are dehumanized, pushed into spaces of bare humanity. How they become disenfranchised, voiceless, cast outside the reach of law and politics, made sub-human. But Rohingya are the living proof that these processes can and are resisted. Over the past three years, Rohingya have demanded to be heard in the international corridors of power. And they have been. They have not only spoken by invitation on other people’s platforms. They have built their platforms from nothing. They have not only spoken the words that are deemed acceptable by powerful people in international spaces, but they have also spoken their voices – no matter how inconvenient, no matter how uncomfortable.

As outsiders, as academics, as NGO workers – actively listening to those voices – is an act of solidarity. When we choose our language, we should choose the language of solidarity because we are more than researchers or staff members – we are also human beings with emotion and compassion.

Standing with Rohingya in solidarity means:

We do not ask them to use words that fit our NGOs, donor objectives, or our legal analysis. We listen carefully to inconvenient voices and act on them.

We do not just use the term ‘ethnic cleansing’, we use genocide.

We do not call Rohingya stateless, without first calling them Arakanese.

We do not talk of long-term residency; we talk of homelands.

We do not speak of pathways to citizenship; we talk of citizenship restoration.

We do not talk of democratic elections, without first speaking of the excluded and disenfranchised.

We do not give or take money and resources, without first questioning whether it legitimizes or supports criminals and the state entities they have built around them.

We listen, we speak and we act because we hold the unimaginable suffering and strength of Rohingyas in our hearts.

We watched the slow-burning genocide unfold. Instead of acting in solidarity, academics, NGO staff, UN and government officials acted out of expediency, pragmatic diplomacy, fundability, and so-called objectivity.

Even the battle to call genocide a genocide and Rohingya a Rohingya has been a long struggle.

The time now to honor the survivors with our solidarity.”

The writer is a Burmese academic and coordinator of the Free Rohingya Coalition and a fellow at the Genocide Documentation Center in Cambodia.