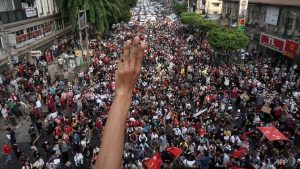 Free Rohingya Coalition condemn Myanmar Coup and support the emerging popular anti-dictatorship movement 7 February 2021 London & Frankfurt:  The Free Rohingya Coalition, an international network of Rohingya refugee activists and international human rights activists and scholars, wholeheartedly support the democratic aspirations of Myanmar’s diverse peoples, both majoritarian Buddhist Burmese and other national minorities.   We join hands with all Myanmar peoples in their struggle to end 58-years of military repression, crimes against humanity, war crimes and genocide. We unequivocally condemn the coup of 1 February led by the Tatmadaw leadership of Senior General Min Aung Hlaing. The Tatmadaw or military