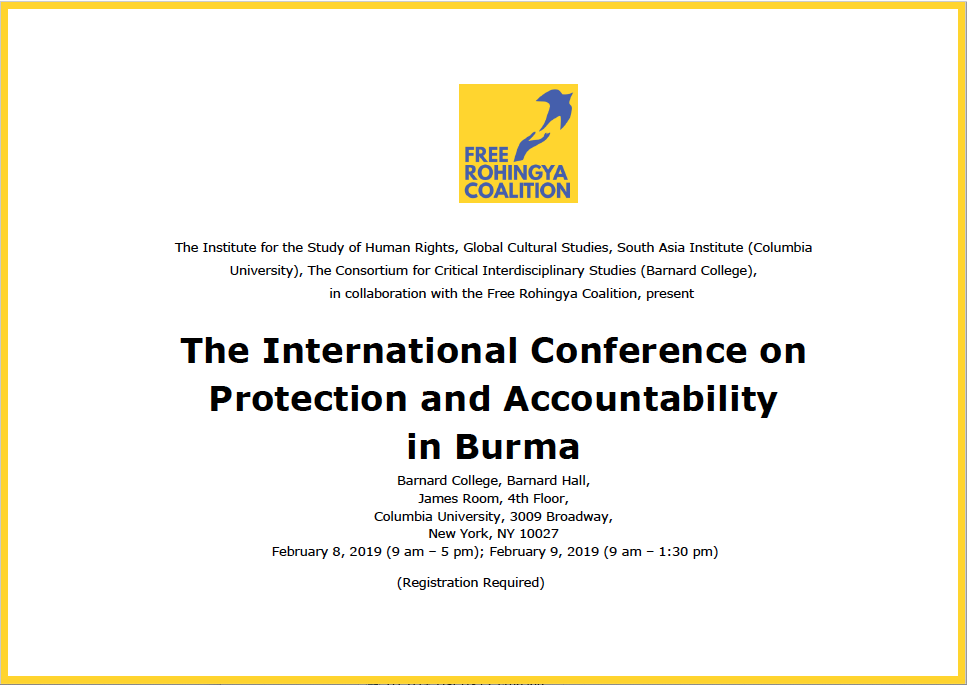 Free Rohingya Coalition, a leading global activist group led by and for the Rohingya people, is hosting a two-day international conference at Barnard College, New York City on February 8-9, calling for accountability and protection for national minorities in Myanmar.

This is a rare convergence of academics and activists hailing from and with expertise on Burma, with humanitarians and international criminal law practitioners, according to the Free Rohingya Coalition (FRC) in a statement released on February 1.

It is being held after more than 17 months since some 750,000 Rohingya fled Rakhine state as Myanmar military conducted a brutal campaign.

The most serious of these include genocide, crimes against humanity and war crimes against national minorities like the Rohingya, Karen, Kachin, Shan, and others – some of whom have fled to the United States as refugees.

Within the last decade, approximately one in four US -bound refugees have been ethnic and religious minorities from Burma, FRC said.

“Buddhism is a religion of absolute compassion for human suffering, and it is unacceptable that Buddhists can be marred by such absolute and immovable hate,” remarks Gayatri Chakravorty Spivak, one of the conference hosts and University Professor in Humanities at Columbia University.

Spivak added: “As engaged scholars and intellectuals of conscience, we cannot ignore this ongoing genocide. We urge the global community to raise their voice to end the atrocities.”

FRC coordinator Razia Sultana, author of the book “Rape by Command” said: “We the Rohingya have been subjected to a textbook genocide which has gradually escalated since my childhood.”

Last December US House of Representatives, in a nearly unanimous vote, declared Burma’s atrocities against Rohingya people in 2017 “a genocide” and called for the release of Wa Lone and Kyaw Soe Oo, the two Burmese Reuters journalists who were framed and imprisoned by Aung San Suu Kyi government for reporting on Rohingya mass graves.

Since early January this year, there have been military clashes between the autonomy-seeking Arakan Army and the government troops in Rakhine state.

UN Special Rapporteur Professor Yanghee Lee told the conference organizers: “The order by the State Government to refuse access to humanitarian organisations with the exception of the ICRC and WFP into northern Rakhine is entirely unacceptable and a serious violation of Myanmar’s international humanitarian law obligation to allow humanitarian aid.”

Internationally renowned activist and scholar Angela Davis adds her voice of solidarity to Burma’s oppressed communities by saying: “I will boycott Burma until and unless it stops repression and atrocities against its own national minorities including Rohingyas, Kachins, Karens , and Rakhine.”