Skip to content
Home > Press Room > Protect the Rohingya calls for the end of the Rohingya genocide! Join the movement by wearing BLACK in solidarity on Thursday, 13 June 2019 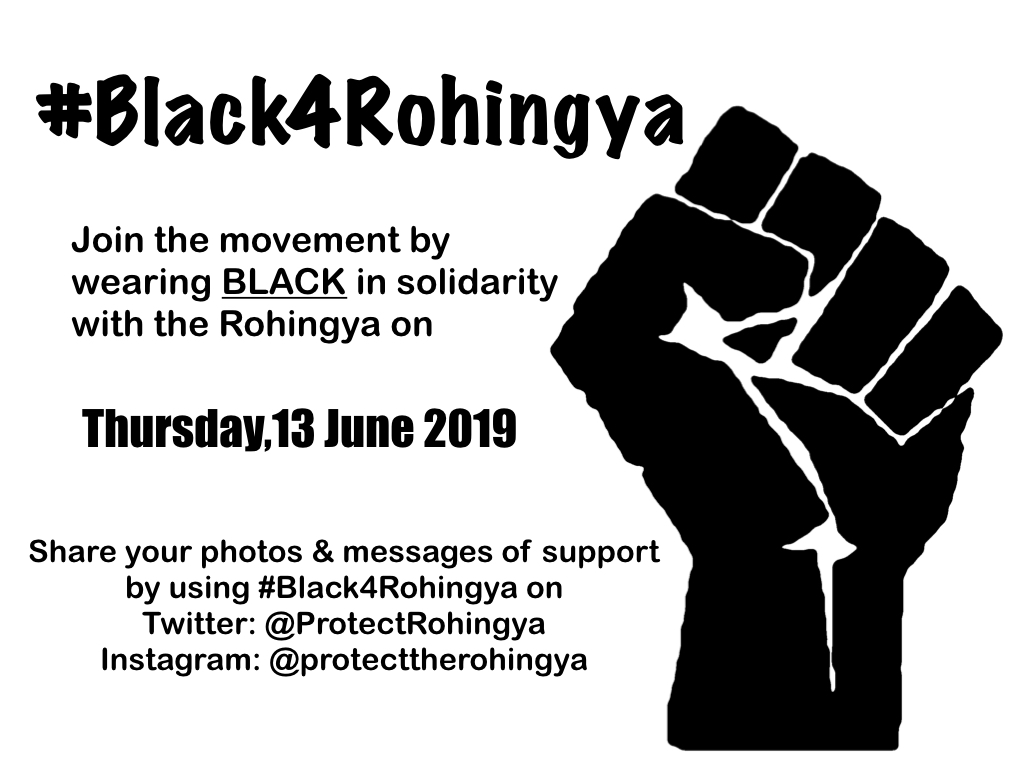 Protect the Rohingya calls for the end of the Rohingya genocide! Join the movement by wearing BLACK in solidarity on Thursday, 13 June 2019 and remember to tweet your photos and messages of solidarity to us: @ProtectRohingya using the Hashtag: #Black4Rohingya

The Rohingya have been described as the world’s most persecuted minority by the United Nations. They live in Arakan State, Myanmar where they have been denied citizenship, freedom of movement, access to education and health services. They have been subject inter aliato land confiscations, arbitrary arrests, forced sterilisation, extortion, torture, rape and collective punishment. Their citizenship was revoked by the state in 1982.

Since 2012 the brutality against them has only been exacerbated by the state’s unwillingness to punish right-wing nationalists who spew hatred against them, address its apartheid policies and keep its security forces in check.

According to Amnesty International, more than 750,000 Rohingya refugees, mostly women and children, have fled Myanmar and crossed into Bangladesh after Myanmar forces launched a crackdown on the Rohingya in August of 2017.

The UN has also documented mass gang rapes, killings – including of infants and young children – and brutal beatings and disappearances committed by Myanmar state forces. In a report, UN investigators said such violations may have constituted crimes against humanity and genocidal intent.

Rohingya in Rakhine State remain in the most dire conditions at the mercy of the security forces which unleashed the atrocities against them in 2017. As refugees in Bangladesh Rohingya face food scarcity, human trafficking concerns, the lack of clean water, no access to jobs, education and medical facilities and the fear of being relocated to Bhasan Char, a previously uninhabited, remote flood prone island.

We urge people of conscience the world over to join our campaign and spread the word about the 13th of June 2019.

#Black4Rohingya is a Protect the Rohingya initiative, initially held on 5 July 2013 and was then moved to 13 June from 2014 onwards in order to commemorate those Rohingya who were massacred in Arakan State in the second week of June 2012.