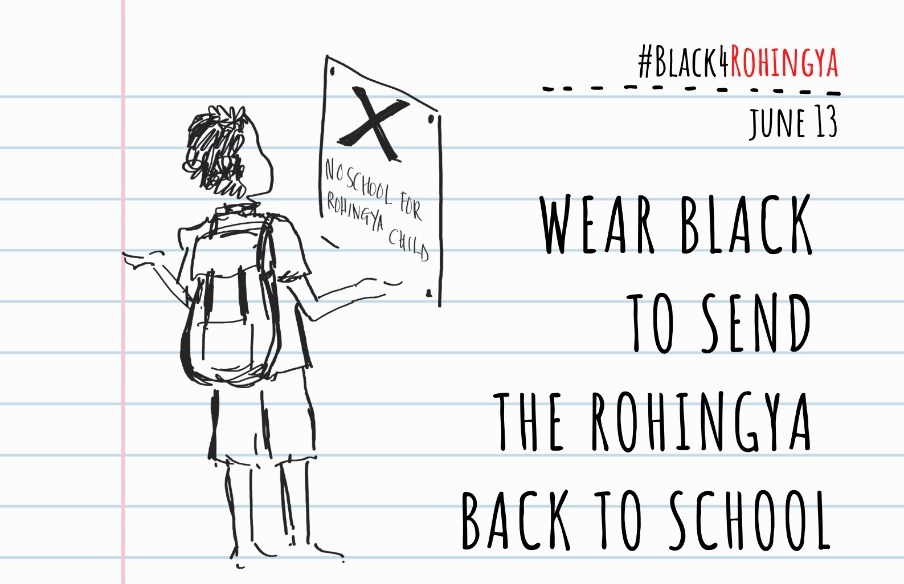 Join the movement #Black4Rohingya by wearing BLACK on Monday, 13 June 2022 and remember to share your photos and messages of solidarity with us on twitter @ProtectRohingya & on instagram @protecttherohingya using the Hashtag: #Black4Rohingya

The Rohingya are native to Arakan State in Myanmar. They are known as the world’s most persecuted minority and have suffered decades of institutionalised apartheid. They are denied their citizenship rights, freedom of movement, access to education, health services, land rights and are subjected to arbitrary arrests, sexual violence, forced labour, extortion, and collective punishment.

On 25 August 2017, a genocide perpetrated by the Myanmar military forced a million Rohingya to flee to Bangladesh. International organisations documented the destruction of over 300 villages, mass rapes, killings, torture and enforced disappearances committed by the Myanmar military.
More than a million Rohingya now live in the world’s largest refugee camp in Cox’s Bazaar, Bangladesh and sadly their suffering continues. Over half a million Rohingya children remain without any access to basic education.
Since December 2021 the authorities have shutdown community schools accommodating approximately 40,000 students. Bangladeshi officials have ordered the closure of informal home-based learning centres which housed 22,000 students and Madrassahs, religious education centres, have also been closed, this is often the only form of education available for many Rohingya children.

The government of Bangladesh, donors and those supporting Rohingya refugees must ensure that Rohingya children receive a formal accredited education that follows the Myanmar curriculum, this is crucial for their safe, dignified, and sustainable return to Myanmar.

Without access to education more Rohingya children will remain illiterate and another generation of Rohingya will be left without the tools to build a brighter future for themselves and their communities. It is our collective responsibility to raise our voices for the Rohingya.

Join the movement #Black4Rohingya by wearing black and sharing your photos and messages of solidarity on Monday 13 June 2022, across social media platforms.

Black4Rohingya is a Protect the Rohingya initiative, initially held on 5 July 2013 and was then moved to 13 June from 2014 onwards in order to commemorate those Rohingya who were massacred in Arakan State in the second week of June 2012.

Companies and products to boycott: https://burmacampaign.org.uk/take-action/dirty-list/