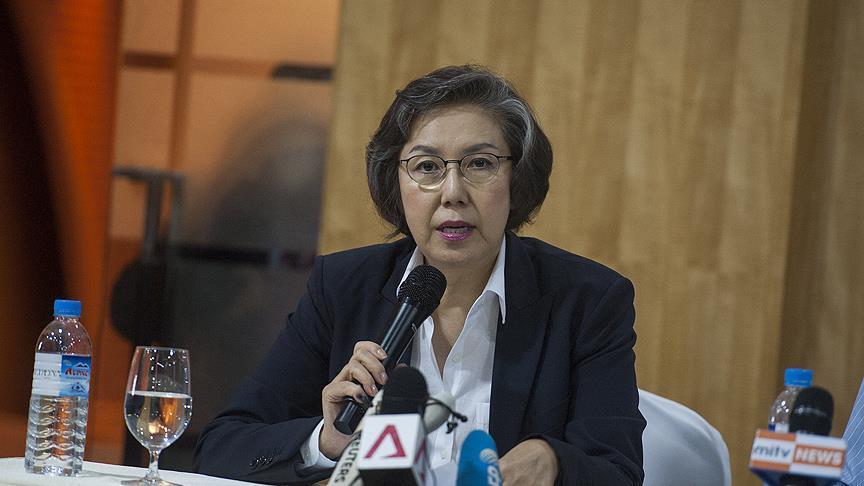 By Umar Farooq | Published by Anadolu Agency on February 8, 2019

Yanghee Lee said she was told the Myanmar military is constructing new bases throughout the entire area and received information that civilians in Myanmar had seen troops moving through villages in Rakhine and heard gunfire nearby.

Her comments came via video at a conference hosted by the Free Rohingya Coalition (FRC) in New York, where she noted the human rights situation for the Rohingya Muslims in the Rakhine state continues to deteriorate.

“The persecution of the Rohingya must stop now,” Lee said as she raised concerns fighting may soon break out in the area, which currently holds 162,000 internally displaced people.

“Democratic space, including the freedoms of speech and association is ever fragile, and communities across the country remain divided along religious and ethnic lines,” she said. “Members of ethnic minorities face marginalization, and discrimination.”

The two-day conference hosted by the FRC brings scholars and activists from around the world to explore ways to hold the Myanmar accountable for crimes against humanity.

The FRC is working to build a grass roots movement to hold Myanmar accountable for a campaign of genocide against the Rohingya.

Lee said that the government of Myanmar must be held accountable for the ethnic cleansing campaign against the Muslim minority, and the problem of repatriating Rohingya refugees who have fled to other countries has turned the crisis into a global issue.

The Rohingya, described by the UN as the world’s most persecuted people, have faced heightened fears of attack since dozens were killed in communal violence in 2012.

According to Amnesty International, more than 750,000 Rohingya refugees, mostly women and children, fled Myanmar and crossed into Bangladesh after Myanmar forces launched a crackdown on the minority Muslim community in August 2017.

Since Aug. 25, 2017, nearly 24,000 Rohingya Muslims have been killed by Myanmar’s state forces, according to a report by the Ontario International Development Agency (OIDA).

In a report, UN investigators said such violations may have constituted crimes against humanity.

*Dildar Baykan in New York contributed to the story