Skip to content
Home > In the News > Could Chinese investments cost Suu Kyi the Myanmar election? 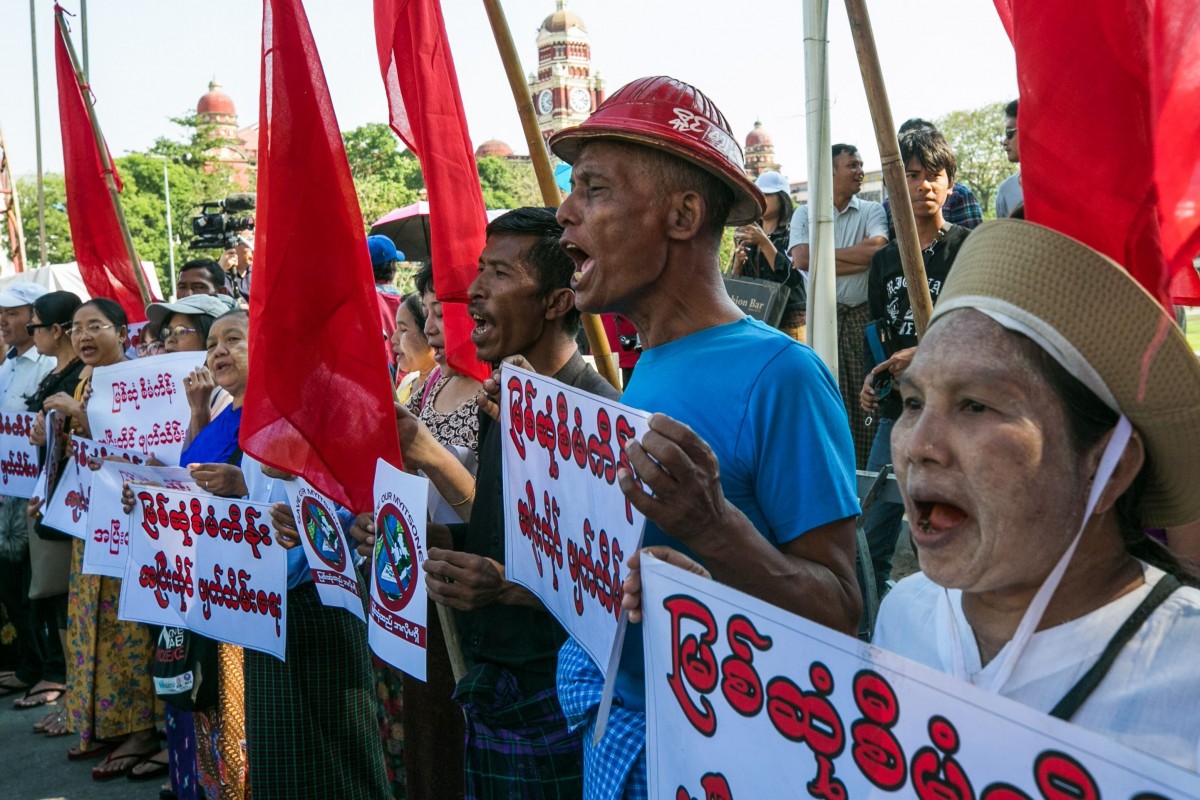 Come November, anti-China sentiment could well be the issue that sways a pivotal election – and not only in the United States. As Myanmar approaches its second vote since the end of military rule in 2011, all eyes will be on how Naypyidaw walks the tightrope between maintaining healthy ties with its largest neighbour and benefactor and managing simmering local discontent with a variety of China-backed economic projects.

For anyone who doubted China might be an election issue, the opposition Kachin State People’s Party is urging in its election manifesto the permanent abolition of the China-backed Myitsone Dam. In its 15-point manifesto for the election on November 8, the party – formed through a merger of six major Kachin parties in 2018 – pledges to “make efforts to halt the Myitsone Dam forever”.

“Nobody wants to see the revival of the dam. Not only Kachin people but also a majority of the people in Myanmar,” the Kachin State People’s Party vice-chairman Gumgrawng Awng Hkam told local media.

Work on the dam project was suspended in 2011 by then President Thein Sein amid local concerns over its environmental and social impacts. Some critics had claimed the electricity generated by the dam – a joint project between the China Power Investment Corporation, Myanmar’s Ministry of Electric Power and the Asia World Company – would primarily be exported to China, while others argued it would displace tens of thousands of locals, destroy biodiversity and submerge temples and other cultural heritage sites. Even with work suspended, the project remains a key sticking point in the Myanmar-China relationship to this day.

As if to pre-empt fallout from the election, Chinese state councillor Yang Jiechi visited Myanmar this month, pledging that Beijing would prioritise sharing coronavirus vaccines with Myanmar once they become available.

Reminding his hosts of the traditional China-Myanmar “Paukphaw” (fraternal) friendship, as underscored by Chinese President Xi Jinping during a state visit in January this year, Yang said the countries should deepen their cooperation in the China-Myanmar Economic Corridor (CMEC), part of Beijing’s Belt and Road Initiative to promote Eurasian economic integration through infrastructure.

However, in the lead-up to the election, some China critics have been urging Myanmar to learn from countries such as Sri Lanka and the Maldives, where China has been accused of using its infrastructure projects as debt traps to extract concessions from smaller nations.

Director of the China programme at the Stimson Centre Yun Sun said it was inevitable that opponents would play up the China “threat” at election time, “if not all the time”.

“Given Myanmar’s xenophobic sentiments, any move by China in any direction is viewed with much scepticism and suspicion,” Sun said.

Maung Zarni, co-founder and head of Forsea, a grassroots network of pro-democracy scholars and human rights activists across Southeast Asia, said China had “zero interest in either democracy or elections in Myanmar” beyond making sure that the government remained friendly to Beijing’s commercial and strategic interests.

CHINA ROOTING FOR THE NLD

Even so, analysts such as Vriens & Partners’ Myanmar country director Jeremy Mullins said there was unlikely to be any abrupt shift in China-Myanmar ties, given their complex nature, whoever won.

Yangon-based political analyst Richard Horsey said that for the sake of continuity Beijing would be happy with five more years of the National League for Democracy (NLD), led by Aung San Suu Kyi. This was because the NLD had been more open to Chinese interests and a better partner for China than the previous government led by Thein Sein.

Director of the Centre for Myanmar Studies at the Guangxi University for Nationalities’ College of Asean Studies Liao Chunyong said that since the start of the Rohingya crisis, China had not only supported Myanmar’s exercise of national sovereignty in various international platforms, but had also provided whatever economic assistance it could.

“Myanmar has also provided important diplomatic support on issues relating to China’s sovereignty, territorial integrity, and development, such as the South China Sea and issues relating to Tibet,” Liao said, adding that it was precisely such mutual support for each other’s core national interests that had led to the upgrading of China-Myanmar strategic relations.

Since the start of the Rohingya crisis in 2017 resulting from the Burmese army’s counter-insurgency campaign in Rakhine state, more than 700,000 Rohingya have fled to neighbouring Bangladesh.

Horsey said Beijing had generally been seen as a “solid friend and supporter of Myanmar”, given China’s continued protection of Myanmar from international censure on the Rohingya issue, especially at the UN Security Council where China is a member.

“Some of the anti-Chinese sentiments, which have always existed in Myanmar, have lessened or been distracted by that fact,” Horsey said, adding that this did not change the long-term view in Naypyidaw that it was necessary for a small country like Myanmar to counterbalance its relations with China with other strategic relationships.

“And the larger China becomes, it becomes harder to find a strategic relationship that can balance it,” Horsey said, adding that while Myanmar had been cultivating closer ties with Japan, South Korea and India, “not even the three combined can really represent a strategic counterbalance [to China]”.

Given such resistance – along with Naypyidaw’s limited institutional capacity – Beijing had “accepted that it needs to be relatively patient with Myanmar and its timelines”, said Horsey.

This patience will be especially important, given a further complication the project faces: the Rohingya crisis.

The CMEC stretches from China’s Yunnan province and cuts across Myanmar from east to west before reaching Rakhine state, the centre of the conflict between Buddhist communities and the Rohingya, and into the Bay of Bengal.

US Institute of Peace country director for Myanmar Jason Tower said that to address the civil war there needed to be a consensus between all parties on fundamental issues such as the sharing of revenues from natural resources, fiscal decentralisation and taxation.

“Moving ahead rapidly with billions of dollars of new projects before all of this is worked out will only further complicate peace-building efforts,” Tower warned.

However, he said China could turn the problem into an opportunity by putting the projects on the back burner and providing more support to conflicting parties in addressing underlying grievances.

“Such a strategy might lead to short- to medium-term delays, but could also place the two countries on stronger footing for a more robust future of economic cooperation,” Tower said.

He added that the corridor was already providing China’s southwestern provinces with access to oil and gas and would provide dramatic benefits to companies in the China-Myanmar border region if the problems could be overcome.

Another Chinese project that has been drawing flak in recent months is the Yatai New City Project at Shwe Kokko, located in Karen State on the Myanmar-Thai border. Launched in 2017 by the Yatai International Holdings Group (YIHG), critics have claimed the project is linked to illicit cryptocurrency schemes, casino and online gambling scam operations that primarily target Chinese users.

Locals have criticised the US$15 billion project for lacking transparency and expressed misgivings over the scale of construction and the growing influx of Chinese migrants. They also worry that the gambling industry will bring in illicit activities and have a negative social impact.

Yatai International signed an agreement with an ethnic Karen armed group, the Border Guard Force, and claimed for several months that the project was part of the belt and road project, but this was denied by the Chinese Embassy in Myanmar last month.

Tower said it was easy to see how these projects caused local outrage, as they introduced social problems while benefiting only military actors, in particular the notorious Border Guard Force which is integrated into and protected by the Myanmar army.

According to its website, the company is registered in Hong Kong, headquartered in Bangkok, and founded by Dylan She (or She Lunkai), an overseas Chinese in Cambodia. Pledging to build a new “internet technology industry city in Myanmar”, the company has described the New City as a “comprehensive international city integrating science and technology, culture, entertainment, tourism and modern agriculture”. It claims the city will become the country’s blockchain special zone within five to 10 years.

Sun said the controversies surrounding Yatai International should have been a law enforcement and management issue for the Myanmar government, adding that Beijing needed to do a better job in understanding the implications of such projects for China’s national interests.

“Had China taken actions sooner to clarify its relationship with Yatai, much of this controversy could have been avoided,” Sun added.

However, Horsey argued that the issue fed into pre-existing concerns in Myanmar about the kind of investments China wanted to undertake.

He said the problem was that by design, the belt and road was not well-defined. Anyone could attach their projects to it in the hope of gaining a “boost … a sort of sovereign umbrella under which those projects can operate”.

He said there needed to be greater clarity over which projects could claim belt and road status, and even “a complete rethink in the way in which such initiatives work”.

Arguing for a more proactive approach, Tower said the transnational nature of the networks used by these Chinese entities made it difficult for China and Myanmar to address the problems on their own or even bilaterally as these issues were embedded across Asean (the Association of Southeast Asian Nations).

Yatai International, he said, maintained an office in Thailand so shutting down the illegal activities would require active cooperation from that country. The project also relies on a Singapore-based payment application called Fincy, which is used to keep law enforcement from tracking financial transactions.

The company behind this shared an office with a company registered to the founder of YIHG in Singapore, and was able to operate due to an exemption provided by the Singapore monetary authorities, Tower said.

Hence, China and Myanmar needed to treat these as regional issues and take them up throughout Asean, Tower said. Regional collaboration was needed to combat money laundering and illegal gambling, he said.

Anti-China sentiments would grow if mega projects under the CMEC were mismanaged, said the Institute for Strategy and Policy-Myanmar China desk head Khin Khin Kyaw Kyee. “To abate the sentiments, it is important to make sure these projects respect and benefit local communities,” she said.

Kyaw Kyee added that Myanmar’s ability to deal with China might be strengthened if the opposition gained on the NLD in the November vote.

Said Kyaw Kyee: “This could strengthen the checks and balances system and empower Myanmar to get a better deal with China.”