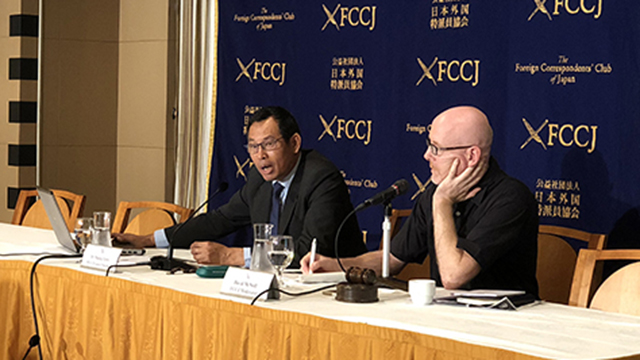 By Noriko Okada | Published by NHK on November 15, 2018 “Ask yourself, if you saw your wife raped and your father shot dead in front of your eyes, if your little 6-month old boy was burned alive in front of your eyes…would you like to be told that you need to go back?” Those are the words of Maung Zarni, leader of a global network of activists supporting the Rohingya refugees who have fled Myanmar for Bangladesh. Speaking at a news conference in Tokyo last month, he accused Myanmar and Bangladesh of making a premature plan to repatriate the refugees without their consent. A few days later, the 2 countries agreed to start the repatriation in November, although the United Nations has expressed concern about their safety back in Myanmar. Many of the refugees also fear continued persecution and are refusing to return.
More than 700,000 Rohingya Muslims have fled to the border with neighboring Bangladesh since Myanmar security forces launched a violent crackdown against them in the western state of Rakhine in August last year. Zarni has visited the refugee camps in Bangladesh and heard the refugees’ stories of gang rapes, mass killings and other atrocities. He studied fascism and genocide at university in the United States and has seen the sites of such crimes at Auschwitz and in Cambodia. He compares Myanmar’s treatment of the Rohingya Muslims to the Nazis’ persecution of the Jews. “We would not ask Jews of the Holocaust to return to Auschwitz,” he said, accusing his country of genocide against the Rohingya. UN investigators have also concluded that Myanmar’s military carried out “genocide,” and that it is guilty of “crimes against humanity,” a charge the government continues to deny. Zarni says violence against the Rohingya is still going on. Rejected as citizens of Myanmar Zarni says the rejection of the Rohingya as citizens began in the 1960s as a propaganda campaign by the military government. It claimed that the minority Muslim population could be a threat to national security in a Buddhist majority state. “We have constructed this popular myth, framing the Rohingya as illegal migrants, land thieves, Islamist invaders, a phony ethnic group, a virus that is a threat to national security and an enemy of Buddhists,” he said. Zarni argues for the legitimacy of the Rohingya as citizens of Myanmar, referring to volume 9 of the Myanmar Encyclopedia, published by the government in 1964. He says that in it, the Rohingya are a recognized ethnic minority, integral to the Union of Burma, representing “75 percent of inhabitants” in the country. Zarni says the historical evidence is ignored by racists in his country. He said the Rohingya are not included in the British colonizer’s population census data because they are treated separately as a “Muslim” group. He said that has given anti-Rohingya racists in Myanmar an excuse to say they never existed. Born and raised in a Burmese military family Zarni says even he did not know of the existence of the Rohingya, even though he was raised in a highly-educated family and lived in the country under military rule for 25 years. He is currently based in the UK, where he is known as an academic and advocate for the rights of minorities in Myanmar. He is neither a Rohingya nor a Muslim, but a Buddhist, like the majority in Myanmar. He was born into a family that has served in the Burmese military for 3 generations, since the military’s inception in 1941. He said his late great uncle was a classmate and roommate of the father of Myanmar’s current de facto leader Aung San Suu Kyi. He said they studied together at Rangoon University, and both opposed British colonial rule. “I grew up thinking that to love Burma is not simply to be Buddhist but to join the military service. That is the ultimate expression of patriotism,” he said. But seeing the atrocities at home, he said he came to realize that his country is “committing genocide,” and that people in Myanmar are lying to themselves and to the world about their crimes. He said he supported Aung San Suu Kyi for 15 years, just as he respected her father. He said he no longer supports her. “We call ourselves pro-democracy and pro-human rights. But the Rohingya have no voice,” he said. “We don’t respect human rights…lies after lies.” Zarni is now at the forefront of critics holding Aung San Suu Kyi responsible for the abuses against the Rohingya minority. “She has incomparably a greater voice and influence… but does not use it,” he said.

Three weeks before Zarni’s visit to Tokyo, Aung San Suu Kyi visited Japan and met with Prime Minister Shinzo Abe. The Japanese government, unlike the European Union and the United States, is not considering economic sanctions against Myanmar or its military officials. Japan is instead offering support for any effort the Myanmar government can make to tackle the Rohingya issue. Japan has offered Myanmar a contribution of about 800 billion yen, or US$7 billion, from its public and private sectors over 5 years to help modernize the country’s infrastructure. It is including US$34 million in humanitarian assistance for the Rohingya refugees, pledging to help improve their living conditions and facilitate their eventual return to Myanmar. “We highly value State Counsellor Aung San Suu Kyi’s efforts over the past 2-and-a-half years,” said Prime Minister Abe. But international human rights organizations and others are critical of this stance, saying Japan is tolerating the abuse of human rights. Japan abstained from voting on a UN Human Rights Council resolution in December last year that urges Myanmar to take all possible measures to protect the rights of the Rohingya, and to cooperate in the investigation of abuses. Japan now stands apart from other countries on this issue, arguing that dialogue with the Myanmar government should be the first priority. Zarni says he appreciates the vast amount of Japanese humanitarian assistance for the refugees. However, he said, “You can only save lives when they have safety, when they are protected by the law and security forces.” He said the only way to ensure the safety of the Rohingya people is to give them international protection. He has warned Japan not to collaborate with what he calls the “Suu Kyi-military hybrid regime,” and has called for a critical internal review of Japanese policy toward Myanmar. “More than money, people want to see Japan as a leader that provides political, intellectual and moral leadership, to help end these grave crimes,” said Zarni.