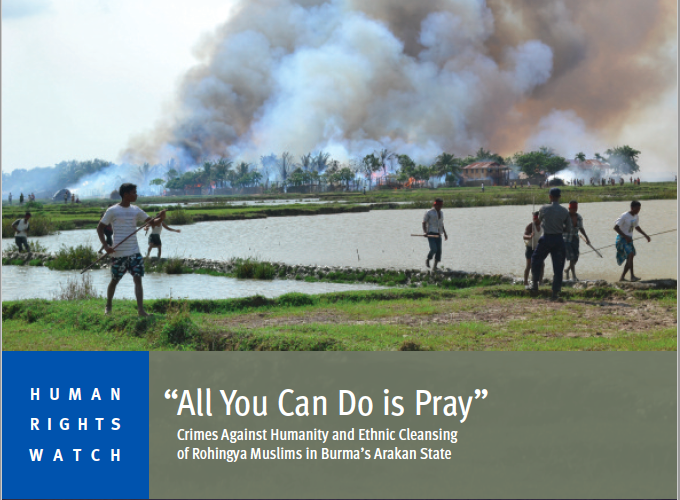 Published by Human Rights Watch on April 22, 2013 “All You Can Do is Pray” Crimes Against Humanity and Ethnic Cleansing of Rohingya Muslims in Burma’s Arakan State Summary The deadly violence that erupted between ethnic Arakanese Buddhists and Rohingya Muslims in early June 2012 in Burma’s Arakan State began as sectarian clashes in four townships. When violence resumed in October, it engulfed nine more townships and became a coordinated campaign to forcibly relocate or remove the state’s Muslims. The October attacks were against Rohingya and Kaman Muslim communities and were organized, incited, and committed by local Arakanese political party operatives, the Buddhist monkhood, and ordinary Arakanese, at times directly supported by state security forces. Rohingya men, women, and children were killed, some were buried in mass graves, and their villages and neighborhoods were razed. While the state security forces in some instances intervened to prevent violence and protect fleeing Muslims, more frequently they stood aside during attacks or directly supported the assailants, committing killings and other abuses. In the months since the violence, the Burmese government of President Thein Sein has taken no serious steps to hold accountable those responsible or to prevent future outbreaks of violence. The violence since June displaced at least 125,000 Rohingya and other Muslims, and a smaller number of Arakanese, to internally displaced person (IDP) camps. Many of the displaced Muslims have been living in overcrowded camps that lack adequate food, shelter, water and sanitation, and medical care. Security forces in some areas have provided protection to displaced Muslims, but more typically they have acted as their jailers, preventing access to markets, livelihoods, and humanitarian assistance, for which many are in desperate need. In the Aung Mingalar area of Sittwe, the Arakan State capital, the government has imposed such severe restrictions on the remaining Muslim residents that they are effectively locked up in their own neighborhood. United Nations officials have been denied access to them. Human Rights Watch traveled to Arakan State following the waves of violence in June and October, going to the sites of attacks. We also visited every major IDP camp as well as numerous unofficial displacement sites and communities now hosting Muslim displaced persons. This report draws on over 100 interviews conducted during those visits with Rohingya and non-Rohingya Muslims and Arakanese who have suffered or witnessed abuses and been displaced, as well as some organizers and perpetrators of violence. We also spoke with diplomats, United Nations officials, and humanitarian aid workers. Human Rights Watch’s focus was on the five townships that experienced the greatest violence and abuses in June and October, where property destruction and arson were so widespread that the damage was visible in satellite images. The sectarian violence in June was sparked by the rape and murder on May 28, 2012 of a 28-year-old Arakanese woman by three Muslim men in Ramri Township. On June 3, a large group of Arakanese villagers in Toungop town, southeast of Ramri, stopped a bus and beat and killed ten Muslims who were on board. Violence between Arakanese Buddhists and Rohingya intensified, with mobs on both sides committing killings and arson. Both communities’ populations suffered and thousands fled their homes. While the state security forces initially did nothing to halt the violence, they soon joined in with Arakanese mobs to attack and burn Muslim neighborhoods and villages. The violence in October was clearly much more organized and planned. For months, local Arakanese political party officials and senior Buddhist monks publicly vilified the Rohingya population and described them as a threat to Arakan State. On October 23, thousands of Arakanese men armed with machetes, swords, homemade guns, Molotov cocktails, and other weapons descended upon and attacked Muslim villages in nine townships throughout the state. State security forces either failed to intervene or participated directly in the violence. In some cases attacks occurred simultaneously in townships separated by considerable distance. In the deadliest incident, on October 23 at least 70 Rohingya were killed in a massacre in Yan Thei village in Mrauk-U Township. Despite advance warning of the attack, only a small number of riot police, local police, and army soldiers were on duty to provide security. Instead of preventing the attack by the Arakanese mob or escorting the villagers to safety, they assisted the killings by disarming the Rohingya of their sticks and other rudimentary weapons they carried to defend themselves. “First the soldiers told us, ‘Do not do anything, we will protect you, we will save you,’ so we trusted them,” a 25-year-old survivor told Human Rights Watch. “But later they broke that promise. The Arakanese beat and killed us very easily. The security did not protect us from them.” The violence in Yan Thei began at 6:30 a.m. and lasted all day until army reinforcements arrived and finally intervened at 5 p.m. Included in the death toll were 28 children who were hacked to death, including 13 under age 5. Satellite images obtained by Human Rights Watch from just 5 of the 13 townships that experienced violence since June 2012 show 27 unique zones of destruction. Images of affected areas in Sittwe, depicting destruction that occurred in June 2012, show 2,558 destroyed structures. Those from 4 of the 9 townships that experienced violence in October show 2,304 destroyed structures. This partial picture of the violence means that at least 4,862 structures were destroyed in Arakan State since June, altogether covering 348 acres of mostly residential property.