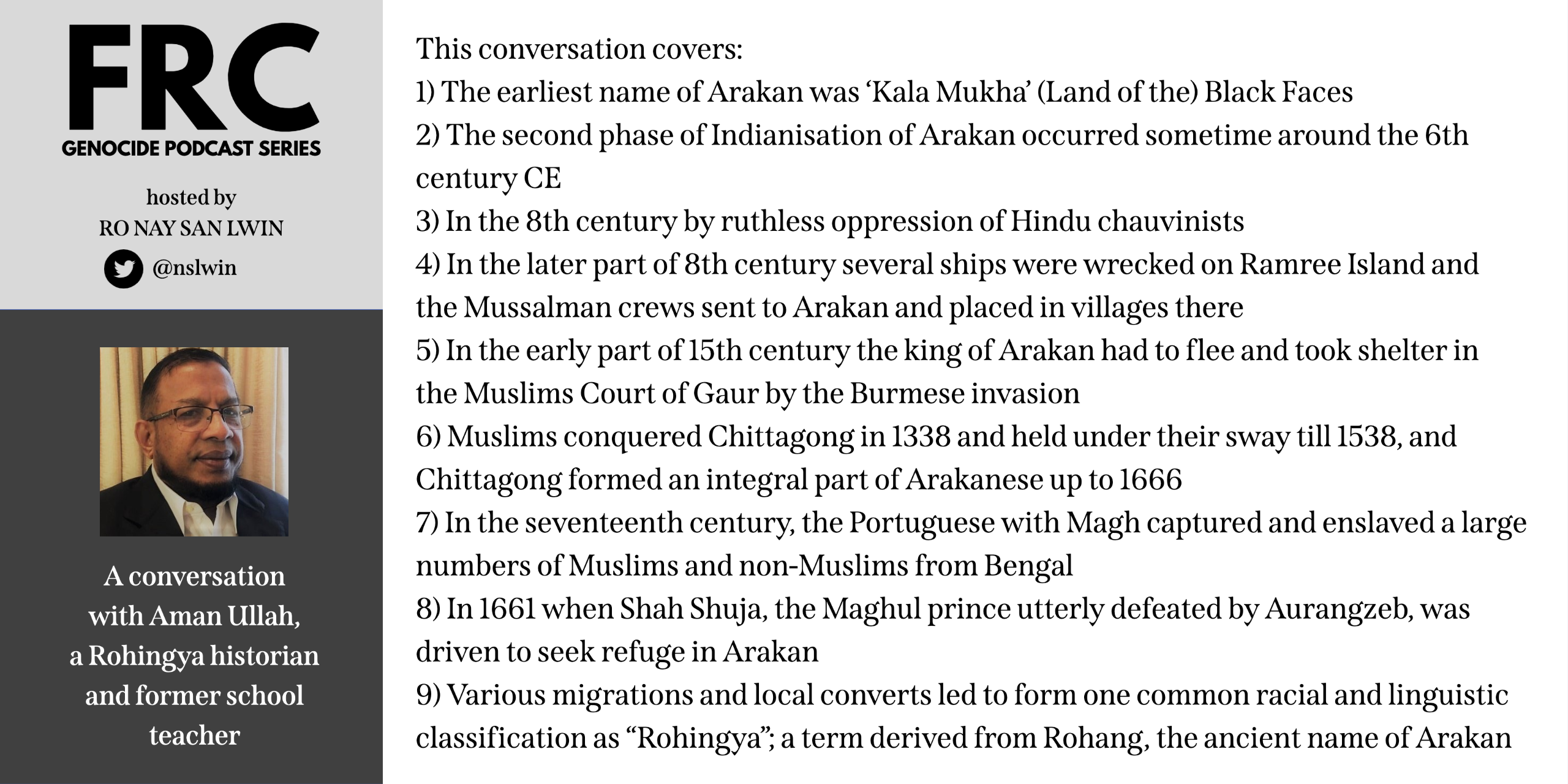 Mr. Aman Ullah, a Rohingya historian based in Bangladesh and he was a former school teacher in Ann township and the southern part of Maungdaw, Arakan State, Myanmar, who has contributed in the field of Rohingya history and humanitarian stance.

• The earliest name of Arakan was ‘Kala Mukha’ (Land of the) Black Faces, which had been a Hindu land since time immemorial. The first phase of Indianisation occurred in the region in the early 1st century CE.

• The second phase of Indianisation of Arakan occurred sometime around the 6th century CE, they had established their kingdom and named their capital Vesali (Wethali).

• In the 8th century by ruthless oppression of Hindu chauvinists, a large numbers of Buddhists from Magadha were compelled to flee eastward and took in the early part of shelter in Arakan under the Chandra kings. They assumed the name Magh as they have migrated from Magadha.

• In the later part of 8th century several ships were wrecked on Ramree Island and the Mussalman crews sent to Arakan and placed in villages there”. These shipwrecked Arab Muslims became the nucleus of the Rohingya Muslim population of Arakan.

• In the early part of 15th century the king of Arakan had to flee and took shelter in the Muslims Court of Gaur by the Burmese invasion. He was reinstated on his throne by the armies send from Bengal. The armies of the Gaur accompanying with the Arakan king were mostly Turkish, Iranian and afghan origin. They settled in a village near Mrauk-U and, built the Sandi Khan Mosque in 1430. They introduced Persian Language in the court of Arakan.

• Muslims conquered Chittagong in 1338 and held under their sway till 1538, and Chittagong formed an integral part of Arakanese up to1666. During these period of more than three hundred years a large number of Muslims from Sonargaon, Gaur and other parts of Bengal spread themselves over the entire area from Chittagong to the Arakan court.

• In the seventeenth century, the Portuguese with Magh captured and enslaved a large numbers of Muslims and non-Muslims from Bengal, which gave rise to the Muslim population of Arakan.

• One of the many other factors that contributed to the preponderance of Muslim population in Arakan was a large scale conversion of non-Muslims. It brought the problem of composition and structure of the Muslim society. They hailed from different ranks in the society. The large majority came from the general mass, who, being attracted by the miracles and piety of the Muslim Saints.

• In 1661 when Shah Shuja, the Maghul prince utterly defeated by Aurangzeb, was driven to seek refuge in Arakan. He and his family and followers were assured of welcome by the Arakanese king. But he and most of his followers were murdered on February 7, 1661. Descendants of Shah Shuja’s followers still survive among the Rohingyas as sub-group with their special name, “Kaman.”

• These various migrations and local converts led to form one common racial and linguistic classification as “Rohingya”; a term derived from Rohang, the ancient name of Arakan. By preserving their own heritages from the impact of the Buddhist environments, the Rohingyas formed their own society with a consolidated population in Arakan well before the Barman invasions of Arakan in 1784 AD.