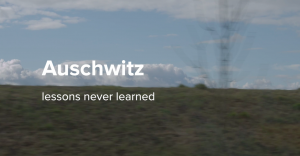 19 October 2020 At 7 pm (Yangon, Myanmar) today the Free Rohingya Coalition is screening its first-ever documentary “Auschwitz: Lessons Never Learned”, based on its group study tour of the Jewish ghetto in Krakow and the 3 camps at Auschwitz this past March.  Two Christmases ago, the two co-founders of the Free Rohingya Coalition, Ro Nay San Lwin and Maung Zarni, a Rohingya Muslim and a Burmese Buddhist respectively, visited Dachau during their short stay in Munich to meet with Uyghur human rights activists who run their anti-genocide campaign from the Bavarian capital. “The world never learns (from the Nazi