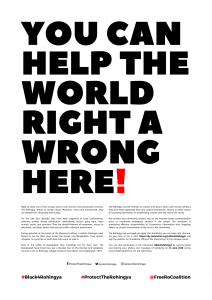 Join the movement by wearing BLACK in solidarity on Saturday, 13 June 2020 and remember to share your photos and messages of solidarity with us on twitter @ProtectRohingya & on instagram @protecttherohingya using the Hashtag: #Black4Rohingya The Rohingya have suffered four decades of systematic persecution in their home country Myanmar. They are denied citizenship, freedom of movement, access to education and health services; they have been subject to land confiscations, arbitrary arrests, forced labour, extortion, torture, rape, mass killings and other forms of collective punishment. Since 25 August 2017, a million Rohingya were forced to flee genocide over the border