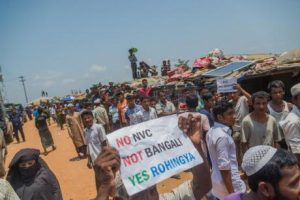 By Natalie Brinham | Published by Open Democracy on October 21, 2018 Wary of the past, Rohingya have frustrated the UN’s attempts to provide them with documentation. In 2016, Nural, as a leader in a Rohingya village in Rathedaung, was called to a meeting by a high-ranking officer from the Myanmar Border Guard Police. There, Nural and the gathered village leaders were told all Rohingya must now accept identity cards, known as nationality verification cards (NVCs), or they would “no longer be allowed to remain in the country” and be “driven out”. Despite the risk of speaking out, Nural raised