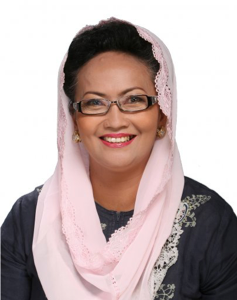 Born in Jakarta 7 April 1955,  and  graduated from Law Faculty of Airlangga University (1978) and having a specialization in Criminal law (1979)  as well as having a post graduate diploma on International Comparative  Sexual Orientation Law from Leiden University (2012) and on Bridging the Research-Policy Divide from National Centre of Epidemiology  of Australian National University (2012). She was the  country prosecutor of the  Women’s International War Crimes Tribunal on Japan’s Military  Sexual Slavery (2000), General Coordinator of The International Tribunal of 1965 Genocide and Crimes against Humanity (2015) and member of judge panel of Permanent People Tribunal of Rohingnya (2017) She is a Human Rights lawyer and for more than 40 years she has been working at several NGO’s working on human and women’s rights organizations as well as environmental issues. She was  member of People Consultative Assembly (1999-2004) and she has been elected as Member of Parliament (2004-2009) and acting as Vice Chair of National Awakening Party (2004-2013).  She used to work and to be Director of Jakarta Legal Aid Institute (1980-1993) and President of Indonesian Environmental Forum (WALHI) and currently acting as National Coordinator of Indonesian Legal Aid Association for Women and Chair of Board of Trustee of Indonesian Legal Aid Foundation, a leading women and human rights organization in Indonesia. She was  Commissioner of the   National Commission on Violence Against Women (1998-2004) and the first Secretary General of the Indonesia Women’s Coalition for Justice and Democracy (1998-2003). She was a member of People Consultative Assembly (1999-2004) and she has been elected as Member of Parliament (2004-2009) and Vice Chair of National Awakening Party (2004-2014) and has long experience in legislative advocacy works. She used to work for three months with UNFPA (Jakarta office) and Gender Unit of Prime Minister’s office of Timor Leste to prepare a Timor Leste Domestic Violence Bill.  She is also Advisory Board of Encyclopedia of Women in Islamic Culture (Netherlands) and co-Founder and now Coordinator of Kartini Asia Network, Gender and Women’s Studies network in Asia also contributor of World Bank Women in Business  and Law book as well as member of  World Bank Advisory Council on Gender and Development (2013-2015). She has also  been active as board member of Sexual and Bodily Rights Coalition in Moslem Society based in Jordan (2007-2014)  as well as co-founder and chaired as Executive Board of Partnership for Good Governance (2011-2013). She also has experience in consultancy’s works on the women’s legal rights and involved in several fact-finding team on human rights violation during Soeharto era. For her commitment and work,  she was nominated as one  of Thousand  Noble Prize (2006). She has a long experience as trainer for lawyer, legal enforcer member of local parliament, bureaucrat on  feminist’s legal theory and practices including gender and shariah as well as  on  CEDAW and ILO Conventions especially on migrant worker’s right. She has experiences as trainer on sexuality and sexual right for young researchers and activists  under IASSC (International Association for the Study of  Sexuality, Culture and Society) and Kartini Asia Network. She is developing a community based legal aid and provide a paralegal training to the community especially to women’s survivor of VAW and trade union and labor’s group. She was also a news paper columnist and had published 5 books on legal and violence against women issues and implementation of CEDAW.  She had published some articles in chapter of books and she has written many articles and conference papers. The latest chapter on Indonesia in the Grip of Fundamentalism : Legal Issues and Women Movement Responses was included in The Future of Asian Feminism in Confronting Fundamentalism, Conflicts and neo-Liberalism (published by Cambridge Scholar Publishing,2012). Her latest research on The Implementation on Domestic Violence Act in Indonesia  is included in the  “Family Ambiguity and The Domestic Violence in Asia (Sussex Academic Press, 2013). She also  co-author of  heteronormativity, Passionate Aesthetics and Symbolic Subversion in Asia ( Sussex Academic Press, 2015), Creeping Criminalisation of LGBT in Indonesia (OutRight International 2017),  Propaganda and Genocide in Indonesia: Imagined Evil (Routledge 2018, forthcoming). She was awarded as a leading women’s right advocate in Indonesia from Nestle (Bear Brand Award, 1997), The Asia Foundation (2006),  Femina Magazines (2007), Metro TV (2008),  Matra Magazine as well as Kartini Abad ini (Kartini of this Century,1989) and Women in Development Award ( 1997). In 2007 and  2008, GLOBE ASIA magazine put Nursyahbani Katjasungkana  as number 51 of   99 powerful women in Indonesia.