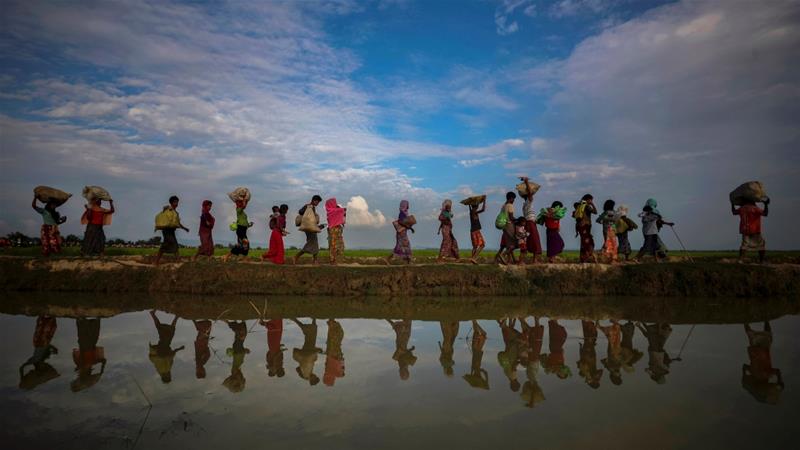 How can Myanmar reverse its anti-Rohingya policies if it has China and India as an example?

On August 25, Rohingya refugees and survivors in refugee camps, as well as their diasporic communities, commemorate the second Rohingya Genocide Memorial Day. On this day two years ago, a new campaign of genocidal violence was launched by the Myanmar military against the Rohingya.

In recent months, small steps have been made to hold those responsible for this tragedy to account. The Prosecutor’s Office at the International Criminal Court is said to be determined to open a full investigation into crimes against the Rohingya including, but not limited to, the deportation of close to 750,000 Rohingya in 2016-2017.

The UN General Assembly has authorised the establishment of the International Independent Mechanism with a budget of $28m in order to collect evidence of Myanmar’s atrocities against the Rohingya and other persecuted minorities for potential use in any future tribunals.

Additionally, there have been serious calls for mounting a legal challenge against Myanmar at the International Court of Justice for failing to honour its obligations under the Genocide Convention.

While these steps are a welcome development, the so-called “international community” continues to fail to protect the rights of the Rohingya and provide them with safety and dignified living conditions. Those who remain in Myanmar continue to be confined to camps and face effectively an apartheid regime which refuses to grant them their rights as citizens. Those in refugee camps in Bangladesh and elsewhere still live in horrendous conditions and continue to face the threat of forced repatriation.

The international community has also failed to take the necessary measures to punish and isolate the Myanmar regime for its atrocities. Except for a few travel bans and limited sanctions, there has been no serious action against those in power in Naypyidaw. Increasingly, one of the main causes of this lack of action has been the rise of anti-Muslim sentiment across the world.

Europe is currently struggling with the growing influence of the far right and its anti-Muslim agenda. The United States is led by an administration which has openly expressed Islamophobic views and implemented anti-Muslim policies, such as the Muslim travel ban. In Asia, the Association of Southeast Asian Nations (ASEAN) has also struggled to take action, while two regional powers – China under assertive Xi Jinpingand India under Narendra Modi‘s far-right Hindu nationalist party – have openly victimised their Muslim populations.

While serving as Myanmar’s most important and powerful protector within the UN system, particularly the Security Council, China is, without a doubt, committing crimes against humanity against several million ethnic Uighurs.

Beijing’s acts of rounding up a substantial segment of Uighurs and putting them in what the communist authorities euphemistically and variously term “vocational training schools” or “re-education camps” are also indicative of a mounting genocide. Beijing has also imposed various restrictions on the use of the Uighur language and has started razing monuments of the Uighur culture and religious buildings; it also recently bannedthe use of Muslim and Arabic symbols across the country.

China has responded to criticism with denial and has employed its international influence to push Muslim-majority countries to back its campaign of human rightsabuses against the Uighur people.

First, last year India struck off its National Register of Citizens nearly four million of its own Muslims in Assam which borders with Bangladesh, in a move reminiscent of the Nazis’ denationalisation of all naturalised Jews at the party gathering in Nuremberg in 1933.

Second, earlier this month, the Indian government stripped predominantly Muslim Kashmir of its special political status and put the disputed region under martial law-like conditions. Telecommunications have been cut off and protests against the decision are being brutally put down.

The international response to these brutal actions has also been rather muted, whether in the West or the East.

This cannot but embolden the Myanmar regime and cause despair among Rohingya that there will ever be enough international pressure to hold their abusers to account and ensure their safe return home. India’s decision to strike off Muslims from the national register and China’s campaign of locking over a million Uighurs in interment camps serve as a powerful example for Myanmar’s leadership that international law is something to discard and global public opinions do not matter.

But all is not lost.

When the international community fails yet again to make “Never again!” the moral and intellectual basis of its policies towards international criminal regimes, it becomes incumbent upon us, the people of the world, to come together and act.

On August 25, the Free Rohingya Coalition is co-hosting an international conference on Myanmar’s ongoing victimisation of the Rohingya at Sogang University in Seoul. Activists and engaged legal and genocide scholars from 12 countries are set to explore various ways to end the genocide including a new grassroots movement modelled after the anti-apartheid boycott of South Africa – not only in terms of trade, but also in terms of culture, sports, and institutions.

In times when rational analysis only gives a bleak prognosis for the wretched of the earth, Rohingya refugees and activists are taking to heart the memorable maxim gifted by the late Italian labour organiser Antonio Gramsci: “Pessimism of the intellect, optimism of the heart”. We, the people, can make change that governments fail or refuse to undertake.