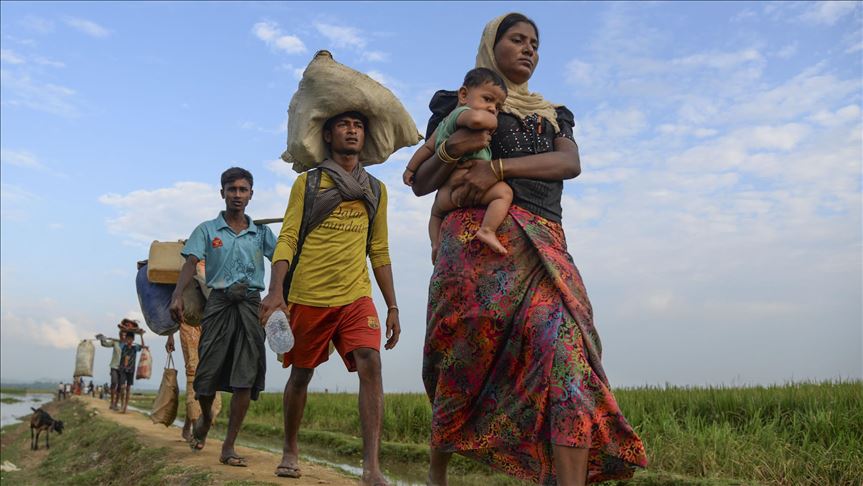 Rohingya poets featured in an anthology, I am Rohingya, write with an urgency and passion of genocide survivors. They reclaim their experience, their group identity and their agency from the victimhood that has framed their existence for so long.

The collection is the first of its kind to be translated and written in English, yet it speaks to the deep significance of all three languages in which the poetry was originally conceived — Rohingya, Burmese and English.

It combines the literary traditions of Rohingya song and Burmese and English poetic styles for the English language readership. The maintenance of Rohingya language traditions through song and poetry stands defiant against the cultural and historical erasure of the Rohingya as a distinct group belonging to Myanmar that has occurred as part of the genocide.

The translations of these Rohingya language songs and poetry, such as ‘Love song’ and ‘Lament (a fisherman’s song)’ and ‘Night blooming jasmine’, explore the issues of love and marriage and invoke the age-old rhythms of life in Arakan through the thick imagery of the market places, fishing boats and wedding ceremonies.

Much of the poetry, including that translated from Burmese, highlights the mutual bonds between Rohingya and the broader nation-state of Myanmar.

It often explains the relationship between the nation-state and Rohingya people as one of parental rejection of a child or as rejected and unrequited romantic love (e.g Maung Hla Shwe, An Orphan).

Many of the poems written in the English language read as an urgent plea and protest to outside world – as Rohingya survivors attempt to process and come to terms with the failure of international bodies and governments to take action to protect them in an ongoing situation of genocide or to effectively sanction the perpetrating military and government in Myanmar, who continue to reap the benefits and riches of power.

“The world outside was too blind to see us,” writes Ro B.M. Hairu.

Despite these laments, this collection encapsulates hope; it is part of a broader concerted global effort and nascent movement on the part of a generation of Rohingya survivors of genocide outside of Myanmar to lift, celebrate and take pride in the Rohingya identity, for which they have as a people paid the ultimate price.

The collection is a testament to the remarkable resilience of genocide survivors in the refugee camps of Bangladesh and elsewhere in diaspora who, despite their individual and collective trauma, use their creative voice to revive and regenerate their culture, traditions and group identity damaged over decades by Myanmar’s slow-burning genocide.

Poetry is a means of self-possession, self-representation and reaffirmation. Literary traditions and creative arts have played vital roles in resistance movements in Palestine, Kashmir and amongst other disenfranchised peoples.

This poetry book is Rohingya resistance and activism at its most creative form.

“We self-identify as Rohingya, so we won’t lose the last glimpse of history and its triumphs

How great we once were, how we have been trampled into extermination.”

This collection is part of a much broader movement that aims to invigorate and replenish Rohingya identity through arts, education and culture. Even the names of the poets reassert their identities from diaspora – whether through the prefix “Ro” which is a title worn with pride to identify as Rohingya, or “Mayyu” as a name for the river and the district in Arakan that was made a Rohingya homeland after Myanmar’s independence.

Broader efforts to showcase Rohingya artefacts, culture and tradition include music, cookery, language, and crafts such as weaving and wickerwork – and in diaspora from Malaysia to Canada, from India to the Republic of Ireland to explore and build Rohingya identities through visual arts team sport, and theatre.

Despite all the international talk of how genocide results in a lost generation, a lack of education, a lack of capacity and a lack of unity amongst the Rohingya, the newer generations with or without formal training are getting on with reconstructing their nation from a distance, nurturing the cut and vulnerable buds, readying themselves for a day where their identities, tenderly sewn back together in displacement, may once again cross the abundant river Naff and be planted in the fertile soil of the motherland where the natural cycle of life may begin again.

“I shall stretch out my hope all the way; Along a path paved with lives I will forge ahead (Yar Tin).”

[Natalie Brinham, Yuriko Cowper-Smith are Ph.D. scholars specializing in Myanmar genocide of Rohingya. Maung Zarni is a coordinator of the Free Rohingya Coalition, an umbrella network of Rohingya refugees and human rights activists, and co-author, with Brinham, of “Essays on Myanmar Genocide” (2019).]