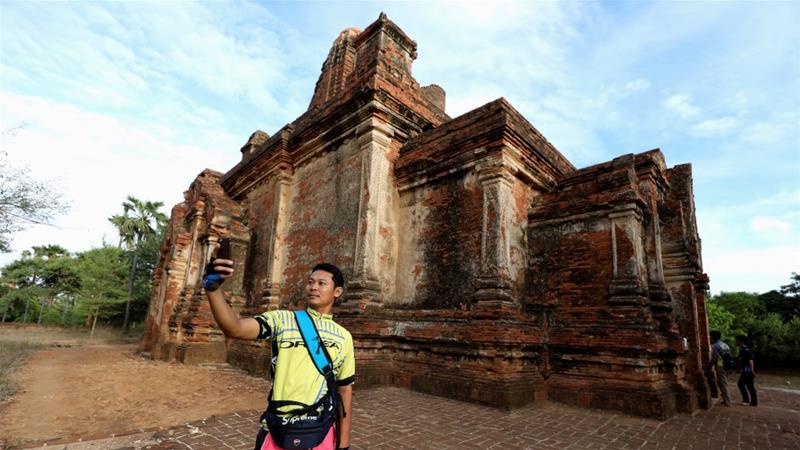 Myanmar, India and China have all pursued UNESCO World Heritage status for sites of mass victimisation of minorities.

By Azeezah Kanji | Published by Al Jazeera on August 4, 2019

On July 6, the United Nations Educational, Scientific and Cultural Organization (UNESCO) announced the success of Myanmar‘s application to recognise the ancient Buddhist city of Bagan as a World Heritage Site – a boon for the image and tourism industry of a country accused by the UN‘s own fact-finding mission of committing genocide and crimes against humanity.

While preserving the archaeological remnants of “the heart of the largest Buddhist empire of its time” (from the 9th to 13th century) at Bagan, Myanmar has simultaneously been erasing all traces of the living Muslim-majority Rohingya from the landscape: physically, historically, socially, culturally, and legally.

Myanmar is now preparing to pursue World Heritage status for Mrauk U, the historical capital of the kingdom of Rakhine, which existed between the 15th and 18th century. In the present, Rakhine state has been ground zero of the regime’s genocidal operation against the Rohingya, as well as atrocities against the ethnic Rakhine Buddhists – who have collaborated with the Tatmadaw military in brutalising the Rohingya even while being brutalised themselves.

In preparation for the Mrauk U bid, local archaeologists are busy assessing how to repair the damage wrought by the military’s war crimes, and protect the ruins from future harm – while for almost a million Rohingya left to rot in refugee camps in Bangladesh, there are no reparations or protection in sight. The government is building a new airport at Mrauk U to facilitate the anticipated influx of tourists – while the humanitarian aid workers and UN investigators attempting to gain access to the state’s persecuted communities have routinely been barred.

Other tourist attractions in Rakhine include its famously idyllic beaches, where according to one Canadian ambassador who recently vacationed there, the waters are “pleasingly turquoise coloured, warm, clean and clear … perfect for snorkelling,” betraying no sign of the ethnic cleansing perpetrated a few kilometres away.

The profits from such touristic pleasures are largely reaped by the military and its cronies. Former military arms broker and military government collaborator Tay Za, for example, owns one of the country’s largest network of luxury hotels and resorts.

Yangon and Naypyidaw International Airports are operated by Asia World, another corporation with deep ties to the Tatmadaw. Asia World is also involved in constructing the Chinese-funded deep-sea port at Kyaukpyu, where Rohingya were butchered and burned out of their homes in an organised campaign of violence in 2012.

“There would be global outcry if any entity declared the labour camps at Auschwitz are to be opened for a commercial activity,” notes Burmese scholar and genocide expert Maung Zarni (not to mention if those profiting included the architects of genocide themselves). “But that is precisely the moral equivalent of what Myanmar is doing with its fresh crime sites.”

While a disco club located near Auschwitz was closed following international outrage, Myanmar is open for tourism business, the evidence of its atrocities carefully bulldozed away.

Myanmar’s staunch supporters, India and China, also celebrated the inauguration of new World Heritage Sites in July: The Rajasthan state capital of Jaipur in India, and the ruins of Liangzhu City in China.

In the Indian government’s nomination dossier for Jaipur, the famed Pink City is described in barely concealed supremacist terms. “Jaipur is driven by Hindu town planning principles,” claims the document, producing a “more universal model” and “more advanced and futuristic vision” than the “Indo Islamic cities” developed “in a political context dominated by Islamic rule.”

In fact, Jaipur’s history is a testament to the deeply engrained pluralism systematically being destroyed by the forces of Hindutva nationalism. Echoing the Mughal concept of sulh-i kul (universal toleration), generations of Jaipur’s Hindu rulers patronised Muslim mystics and artisans. During Partition the Maharaja pledged to protect the Muslim inhabitants of the city and asked them to stay – an “advanced and futuristic vision” indeed, one under existential threat from the extreme-right Bharatiya Janata Party (BJP) currently in power.

In Jaipur’s state of Rajasthan and other areas under BJP control, history textbooks have been rewritten to delete or demonise Muslim figures of the past, as vicious mob lynchings target Muslims and other marginalised communities in the present. Last year, the government stripped nearly four million Muslim Indians of their citizenship in Assam.

In denigrating Muslims as foreign tyrants, the BJP is itself parroting the propaganda of a foreign tyrannical force that arrived in India with an agenda to dominate and exploit. British colonisers “Benefitted from pitting Hindus and Muslims against one another and portrayed themselves as neutral saviours who could keep ancient religious conflicts at bay,” according to eminent historian Audrey Truschke. “While colonialism ended in the 1940s, the modern Hindu right has found tremendous political value in continuing to proclaim and create endemic Hindu-Muslim conflict.”

Even the iconic monument to enduring love, the World Heritage Site of the Taj Mahal, has been turned into a battleground. Some BJP officials insist that the Taj was originally a Hindu temple, not a Muslim Mughal tomb, and so should be renamed the Ram Mahal or Krishna Mahal (a theory debunked by the Archaeological Survey of India). Since November, Muslims have been banned from praying at the Taj Mahal mosque except on Fridays, by order of the Supreme Court: exclusion rationalised as historical preservation.

In China, too, the mantra of preserving heritage has been used to strip dominated communities of their histories.

Like the “vocational training” China has professed to be providing Uighur Muslims – thin cover for the internment and indoctrination of as many as three million Uighurs in concentration camps – “cultural protection” serves as a vehicle for forcible assimilation.

“China utilizes the UNESCO [cultural heritage] lists to gain international recognition of minority cultures, such as the Uighurs’, as small parts of Chinesenational heritage, allowing them to take only narrow officially defined forms,” observes a 2018 study by the Uighur Human Rights Project. “The government frames its interventions in Uighur culture as ‘saving’ it and uses this to justify thorough control of Uighur cultural production.”

This “saving” has involved China demolishing the centuries-old Uighur city of Kashgar, once the “best-preserved example of a traditional Islamic city to be found anywhere in central Asia” according to architect and historian George Michell – a stop visited by Marco Polo and others travelled along the fabled Silk Road.

For modern-day travellers, the government has erected a potemkin version in which tourists can witness “exotic” Uighur cultural performances and catch a peek inside “authentic” Uighur homes: a cultural theme-park in the midst of the world’s most intensive surveillance state.

In China’s rendering, Uighur musical traditions have been stripped of their Islamic roots and presented as a branch of Han Chinese culture. Dozens of Uighur mosques and shrines – some more than 800 years old – have been destroyed by a state that now boasts the largest number of World Heritage Sites in the world.

From China to India to Myanmar, a common thread is the persistently colonial conceptualisation of “heritage” – as a collection of aesthetic commodities severed from the social context that gives them life and meaning, as cultural fossils disinterred from their human soil.

It was in the name of safeguarding humanity’s “heritage” that European colonisers appointed themselves the rightful guardians of the rest of the world’s treasures, while ruthlessly dismantling the civilisations that produced them. It is in the name of “heritage” that the United States parades as the protector of Iraq’s precious artefacts, having illegally invaded the “cradle of civilisation” and ripped it apart for spoils.

Equally enduring, however, is the cultural resistance of the people who have been colonised, subjected to genocide, and dispossessed; the people who continue to bring poetry, music, dance, and art into the world, in defiance of the powers violently determined to erase them.

Azeezah Kanji (JD, LLM in Islamic Law) is a legal academic and writer based in Toronto.